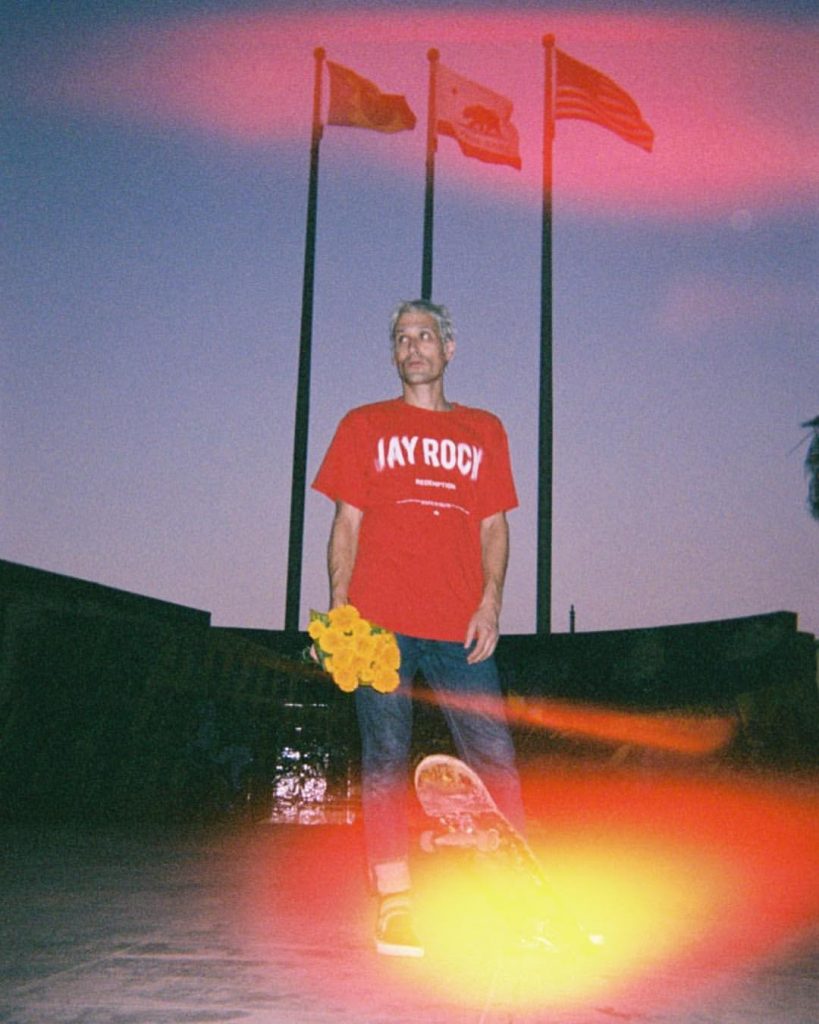 Travis Keller (pictured above in a photo by Ollie Promblemas) is an American creative director, writer, publisher, record label executive, manager, skateboarder and all round artistic whirlwhind. Travis got his initial start in the art game as a photographer and skateboard video maker in his teens. Skills which took him to LA in the mid 1990s were he promptly founded cult culture website ‘Buddyhead’ with his best-friend-at-the-time, Mr. Aaron North.

Through ‘Buddyhead’, as well as his personable nature, friendship with ‘The Icarus Line’, writing, and photography skills; Travis spent the late 1990’s and 2000s immersed in the global music scene – running the ‘Buddyhead’ website, releasing records through ‘Buddyhead’, being a journalist, accompanying bands such as ‘Nine Inch Nails’, ‘Ink and Dagger’, and the aforementioned ‘Icarus Line’ on tour, hanging out with ‘At the Drive In’, getting wasted with ‘Oasis’, collaborating with Raymond Pettibon, and living life as a general cultural roustabout.

Through it all Travis has remained committed to art above all else.

A combination of people, skills, and equipment that allows ‘American Primitive’ to do pretty much anything art wise: shoot video, record music, edit, host concerts, plan events, and engage in the usual marketing, sales and hustling.

Taking it back to the beginning, Travis centres the ‘why’ of his artistic drive and culture hustling skills with an origin tale baked in American small-town desolation and DIY ethics:

“My first art, like on my own will….  outside of school, was at 13 years old – living in Northern Idaho – and making skateboard videos of my friends and I. The local cable company in my hometown had a non-linear Super VHS editing system that people could use for public access. I taught myself. They would play them on the local cable access channel and we sold a couple thousand copies outta my parents garage for $7 a copy.

Oh and the why? Out Of sheer boredom, ever been to Northern Idaho? It’s a cultural void. Which I think, at least for me, made me create my own world and survive it. Until I could move to Los Angeles. So… outta boredom, survival and it was fun.“

END_OF_DOCUMENT_TOKEN_TO_BE_REPLACED

Ben Adams is an Australian artist, designer, screen printer and sculptor going by the name ‘Freak Street’. Ben creates unique work that  is imbued with a vibrant, frenetic DIY-punk-fury. It’s a style reminiscent of the 1960’s outre-comic scene, combined with the results of growing up in the 1990s – weird lines, hypercolour, drugged out dudes, surfing, monsters, pop culture references and lots of weirdos.

Ben freely admits that his style comes from a youth spent skateboarding, that one time he did hallucinogenic drugs, toys and the underground comics scene, stating:

“As a youngster, all of the World Industries and Blind skateboard graphics were hugely influential, I used to draw them all day in my books at school.

In later years, discovering counter-culture artists like Robert Crumb and Gilbert Shelton was very eye opening, they set my drawings on a forward trajectory.“

(Some art by Freak Street below)

Recently, Ben has been firing on all cylinders art wise: he set up his own screen printing studio and is taking orders; has been working on his masks and sculpts; and in epic news – has did the art for the new ‘Regurgitator‘ LP Head Roxx, and also provided the band some masks to wear onstage!

So get to know Ben and his art, by reading the Art Talk Interview, below…

END_OF_DOCUMENT_TOKEN_TO_BE_REPLACED

RJ Williams aka ‘A Nameless Force’ (previously ‘The Massive’) is an Australian artist, designer and vandal well known in the Australian scene thanks to his eye catching graphics and ability to get his art up all over Sydney, Australia and even the Globe. Indeed, there is something magical about RJ’s work – all symbols and bright colours. As if all his art is just part of a never ending spell or sigil. To what end – only RJ knows.

Born in 1980 RJ grew up on hip hop, toys, body-boarding and surfing – activities that continue to influence his art today.

And currently? With RJ having recently re-branded to ‘A Nameless Force’ and pushing his art hard all round the globe – now is the perfect time to get to know the man and his art by reading the Art Talk Interview, below…

END_OF_DOCUMENT_TOKEN_TO_BE_REPLACED

Works that are full of intricate detail, imbued with a sense of movement and usually topped off with vibrant colour. Oh so much colour!

Whilst a lifelong creative, it was only recently, in his late 30’s and 40’s that Matt decided to venture hard into the art game, with the man himself stating

“As I headed into my late 30’s I was missing my creativity a lot. I had a stable job, so for me to kick start my art felt right..but it would have to be after hours, late night hustle….fuck it, don’t care, I need to do this, now.“

(Art below by Matthew)

With ole Matt quickly on his way to becoming a major presence in the global scene, and currently a featured artist in the 2018 ‘Bein Narly‘ festival here in Australia – now is the perfect time to get to know the man and his art by reading the Art Talk Interview below…

END_OF_DOCUMENT_TOKEN_TO_BE_REPLACED

Mike McGann is an Australian artist who was prolific in the Australian Sci Fi scene in the 1970s and 80s. Back then Mike’s work could be found gracing the inside of zines, flyers for conventions and most notably, on t-shirts Mike would screen print himself, at home.

Mike and his art comes from a period in sci fi fandom before the ease of digital technology and the internet. Back when it was all done by hand, and exchanged via mail-order or at sporadically held conventions. The fandom of this period was personal, DIY and punk as fuck. We love it.

And today? Well me discovered Mike and his work when he was selling some screen printed t-shirts at a pop-culture collectibles fair in Hurstville, NSW; in Australia earlier this year. We instantly fell in love with both Mike and his work.

Sadly, Mike has pretty much no online presence – He’s 64 and doesn’t have a computer or smart phone. BUT when we met up a second time a while back, he gave us lots of binders of his work and said we can scan em up and post em online to share with the world!

Now… You may be wondering how you can get in touch with Mike or order his work after seeing the images below. And… Well… The short answer is you can’t.

Mike is a face to face person for the time being. BUT we here at Art Whore are planing to do what we can to bring Mike’s art to the masses. So stay tuned for developments. AND as always, if you really must know more. RIGHT NOW. Just get in touch via email: contactartwhore@gmail.com

And finally? Highlights of some of Mike’s art – from two portfolios he self published in 1986 – below…

END_OF_DOCUMENT_TOKEN_TO_BE_REPLACED

Crack Cartoons is a young American artist who hit us up asking us to look at her work, and consider her for a “feature”… Well… We here at ‘Art Whore’ respect the hustle and also dug ole Crack’s work, so we asked her to take part in the ole Art Talk series of interviews so both ourselves, and our dear readers, could find out more about her.

(Art by Crack Cartoons below)

Read it all, below…

END_OF_DOCUMENT_TOKEN_TO_BE_REPLACED

“Fake” is all the rage right now – what with Mr Trump and his ‘fake news’, Damien Hirst and his recent art show comprising of ‘fake’ artifacts from a made up lost civilisation, the rise of unpaid internship aka ‘fake’ jobs and now, added to this list is Mr Tyson Tabbert and his brilliantly curated travelling John Waters tribute art exhibition full of ‘fake’ pieces of pop culture trash.

We at ‘Art Whore’ were exposed to the ‘Lost Merchandise of the Dreamlanders’ John Waters tribute group show and immediately blown away! Here was a show devoted to one of our favourite directors – Mr. John Waters – and featuring a whole slew of amazing pop art pieces. From toys, to bed sheets, Halloween costumes, ash trays and more. The show itself featuring thirteen artists working both collaboratively and independently, all under the loving eye of curator Tyson Tabbert.

(Photo below of artist and show curator Tyson Tabbert)

Coming to the end of the exhibit’s first showing at ‘LaMaMa’ in New York City (May 25th to June 24th), and just about to travel to Lethal Amounts in Los Angeles (July 8th to July 28th) – we thought it would be good to have the exhibit’s curator Tyson Tabbert explain it all, so we asked him a few questions. From who the other artists involves are, how they all came to connect, if there had been any legal issues, potential John Waters sex toys and much more.

Read it all below…

END_OF_DOCUMENT_TOKEN_TO_BE_REPLACED

QWUX is an artist, designer, curator, editor and all round Australian art scene king. QWUX is firmly part of the ADD generation of artists – forever working on multiple projects, in multiple mediums, all imbued with QWUX’s unique talent.

And QWUX’s main themes? Well that’s easy – Japanese culture, food, computer games, pop art, designer toys, and being an all round legend! Hell, QWUX is such a good dude that when asked what he would most like to be remembered for – he simply answered: “Helping people.”

(Some art by QWUX, below)

With QWUX recently revealing his new project – ‘STUPIDkid’ – and having recently arrived back home in Australia after spending time in Japan, now is the perfect time to get to know the man and his art by reading the Art Talk interview, below…

END_OF_DOCUMENT_TOKEN_TO_BE_REPLACED

Joy Ivill is an Australian artist who came to our attention due to her beautiful, fun and technically amazing embroidery. Works that are feminine, sexual, biographical, filled with humour whilst also being tough as nails – Our kinda art for sure.

Under Joy’s hands the act of sewing and embroidery is stripped from it’s historically utilitarian base – think grandma sewing jumpers, mom darning socks or even a young child sewing on Scouts Badges – and transformed into a mode of storytelling, of narrative, of personal catharsis. Tales of bad acid trips, world travels, ended relationships and childhood memories told via fabric and stitchwork.

(Photo below of some art by Joy)

With Joy currently gaining major momentum in the pop art, fine art and fashion worlds, now is the perfect time to get to know her, by reading the Art Talk interview, below…