‘Skinner’ is an all round art machine, who has been pumping on all cylanders in the art-hustle full time for the last 5 years or so, thanks to the economy going to well… shit.

(Photo below of Skinner and some of his art) 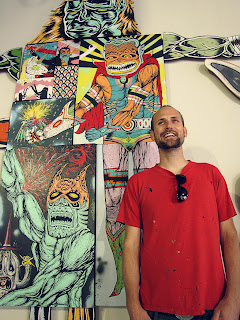 …Well every smoke cloud has a silver lining and since turning full time ‘Skinner’ is currently killing it, collaborating with people like the legendary Frank Kozik, as well as producing fine art, sculptural work, toys, zines and clothing.

Don’t remember. Maybe some confusion, sadness, excitement about cartoons and if I got new shoes I would be excited. Being isolated and weirded out by people and living in my mind. Discovering comics, fantasy art, ultra man, the hulk and dinosaurs and sharks and Vincent price and Godzilla, bro!

Intense confusion and isolation, at this point depression and overwhelming anxiety starts to set in. Lack of ability to identify with others. Still good at sports and getting good grades. Start to discover a dark sense of humor. Afraid of girls. Afraid of intimacy. Listening to morrissey’s album,” your arsenal” a lot. Getting accepted by ” cool” people but caring less than ever. Got a girlfriend. Tried to pretend I knew how to kiss. Made girl laugh. Still felt good about it. Heavily into comic books by this time. Probably watching the legend of Hercules

Couple years after my brain damage from a car accident when I was 17. Moved away from auburn to Sacramento. Not ambitious really. Kinda hopeful about growing up. Still get depressed a lot. Start to drink unreasonable amounts of alcohol. Made martinis and watch spider man cartoons. Living downtown Sacramento is cool. Directionless.. Still afraid of girls/intimacy. Wasting money and time. Stupid.

(Picture below of Skinner on the art grind) 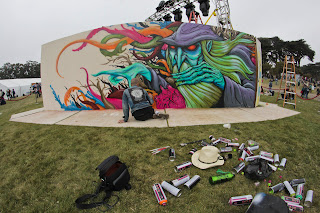 When did you first start making ‘art’ (drawings, paintings, anything)?

When I was 4-5… Dinosaurs and muscles

In your Clutter interview you mention the impact that high-school art classes had on your life – have you had any further formal artistic training since then? And how has formal art training added to your work?

Not really.. Just kinda blindly feeling my way through a cave with slimy walls.. A doorway leads to the left and I can barely see a small series of steps illuminated by small archaic torches lining the walls. They don’t look like they were made by human hands. I can hear the slight sound of small bones crunching in the distance and the jelly like ooze seeping from the crevassed ceiling is ominous in its cold intent. Roll for initiative. There is an art critic attacking you with a +3 who gives a shit.

5 years ago when the economy collapsed. Jump in and swim uphill all my tadpoles!

(Picture below of a Skinner piece) 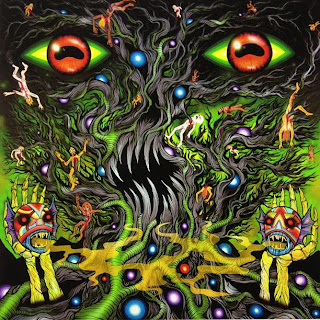 Why the name “Skinner”?

Haha!! You think I chose that name?

Critical Hit. That’s my company bro and the motto is… If you don’t follow your dreams, someone will pay you to help with theirs.

I like to paint on wood or walls. Toys are fun.

Virgil Finlay. Alex Pardee… New guy I like, Nick Gucker… Frank Kozik has been a super positive influence on me lately. He is smart.

That it is applied to the capitalist structure.

That I can make money and buy other people’s stuff. And so I can pay for a dr. So I can go get diagnosed with new weird shit.

Is the rise of ‘art’ toys an indication of the changing nature of ‘art’? OR just a bunch of nerds with too much $ and time?

Describe the method of making a ‘Skinner’ piece –

(a) your painting + illustration work?

(b) your sofubi pieces such as the ‘Ultrus Bog’?

(Picture below of an ‘Ultrus Bog’ sofubi by Skinner) 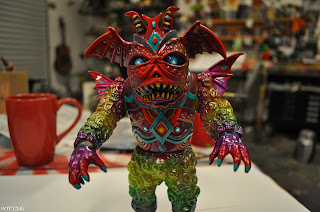 I did some turnarounds. Then they get made and then I paint some.

(c) your metal work such as the ‘Lurker’ pendant?

(Picture below of Skinner’s ‘Lurker’ pendant) 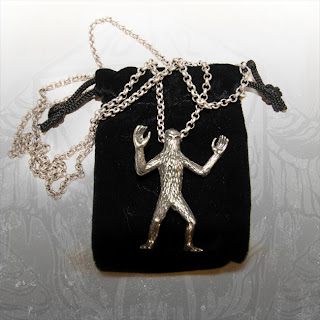 I have my friend Winnie sculpt them shits.

You are a huge collaborator, what role do collaborations play in your artistic practice?

I don’t collaborate that much. Except in my relationship with my girlfriend. I guess if you mean collaboration as in business with people.. Then yeah I collaborate but artistically I don’t do it that much.

You often collaborate with L’Amour Supreme – how did you 2 start your artistic relationship/bromance + how has collaborating with him affected your practice? 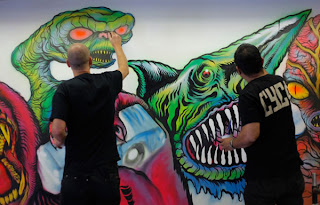 I sometimes paint with him at festivals. Our mural we did in LA was fun and it was a collaboration of weird Hollywood shit. He’s a good painter.

Do you use digital technology in your work at all? If so how, and what has it added to your practice?

I do digital stuff for shirts usually. Design stuff. Never in my paintings or personal work. It helps get stuff done faster and it’s specific to print.

You often work with the NYC brand ‘Mishka’ + artists associated with them. What are your thoughts on ‘Mishka’s position and role in the toy-art scene? They seem to be a much loved company.

(Picture below of a Mishka bootleg sofubi, as painted by Skinner)

I did a shirt with them and a toy release.. I like to rap with Greg a lot and laugh. Then I paint with Joel.. It’s fun..I’m really only in it so I can hang out with their dog, Romy. But yeah they are toy illuminati dudes. That ghost clinic shit.

You have some t-shirts + hoodies for sale on your siteare you going to push this into a full line of clothing, or just keep doing the occasional drop?

(Picture below Skinner hard at work in the Critical Hit space) 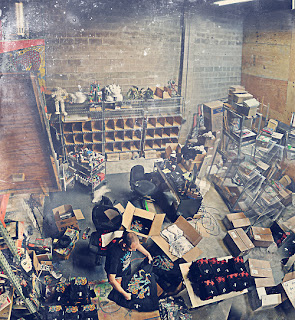 Well I’m doing Critical Hit full time so I can pick and choose what I do more in terms of jobs.. I’d rather do my own thing and build it up.. Got new shit coming out all the time!

You are an outspoken weed fan, and your art is very imbued with the 1970’s dayglo aesthetic – how do drugs impact on your personal life + your art practice?

(Picture below of Skinner and a nice bud) 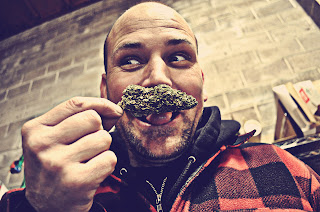 I smoke weed to chill bro.. Honestly it is medicine that can help people.. It really helps to understand how trivial a lot of day to day pressures are.. It makes things fun.. But I don’t really smoke weed all the time.. I just like to have some for whenever it seems right. I think the fact that its illegal and alcohol is openly encouraged is stupid. The reason that weed isn’t legal is because it changes the way people are normally programmed.. It makes people think about shit.. It takes them out of their normal ” work your ass off and don’t question shit” mind state.. That’s why it’s still illegal..

Have you ever done DMT or other strong psychedelics, and what was that experience like?

I take mushrooms still.. Here and there.. No DMT.. No acid..it was fun. Go to the beach and giggle bro.

Does your self-directed work all exist in its own ‘universe’; such as the ‘Skinner’ universe? (Yes; I am basically asking if you see your characters all interacting in your head.) IF so, what do they get up to?

Everything I do mirrors the mental and emotional state I am in.. There is no coherent chronology except in the fact that it is me who makes the stuff.

At the mountains of madness pinball machine.. A lovecraftian themed project I am excited about.. Also I want to make short films now.

Not really.. I have been canceling everything so I can give myself room to do my own thing. Even if people hate it.

(Picture below of a recent Skinner watercolour piece) 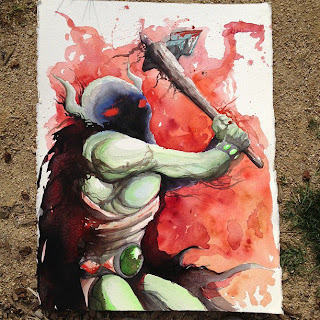