Mikee Riggs comes from Albuquerque, USA, runs ‘ToysAreSanity‘ and has so far released t-shirts, prints and the Sewer Creep sofubi to much acclaim. For Mikee, art and toys are his life, and the dedication has paid off with his Sewer Creep creation appearing in the recent Monsters From the Island group show at the ‘Clutter Magazine‘ gallery space in NYC.

(Picture below of some Sewer Creep sofubi, as painted by HelloPike) 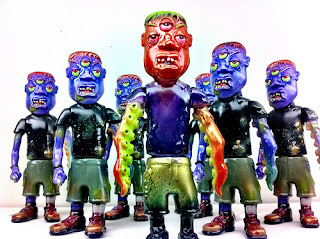 Get to know Ian the Sewer Creep, ToysAreSanity and Mikee Riggs in the interview below…

Seeing Toxic Avenger on VHS at midnight at my friend Heaths house. Had loved the cartoon never seen the movie. If that movie wasn’t the ball dropper for me it was The Wild Life.

(Cartoon depiction of Ian the Sewer Creep below) 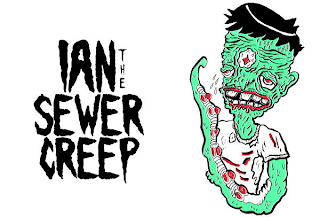 Super admittedly shitty but being a huge nerd in high school I didn’t do well with girls. I was dating this girl when all of a sudden the hottest girl on the dance squad started flirting with me. Admittedly my girlfriend at the time and I didn’t see eye to eye on our recreational habits so I broke up with her and 3 hours later was dating the Dance squad girl. Not very classy but definitely a turning point as far as self-esteem goes LOL.

At 20 I was with a girl I thought I was going to marry. One night we went to see a midnight showing of the Crow she got hammered and threw up in the theater. Then the whole ride home she keeps telling everyone in the car to not tell me what happened. i was the one driving!!! Remember kids if you use the booze sometimes you are bound to lose.

If you are scared to take risks don’t shit in the tub.

American Nightmare – The be all end all Hardcore band for me.

Six feet under – That show just felt long one long Sunny Day Real Estate record to me, dark and lonely.

Re-Animator – Herbert West is a man to admire.

Transmetropolitan – when I was 13 I decided I wanted to be Spider Jerusalem.

(Picture below of a blank Sewer Creep vinyl) 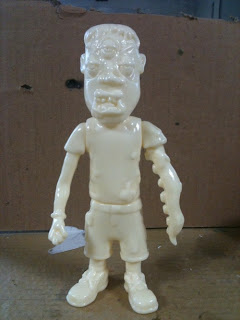 I guess I designed a toy of re-hashed crap lol!! In all honesty I don’t really feel comfortable with labels when it comes to stuff like this, which is funny because I am usually a stickler for labels and genres and rules. I think in all honesty I would never consider myself an artist. I made a toy that I wanted to see. Since then my influences and taste have changed drastically. In all honesty I always wanted to be a writer. I want to be the idea guy.

When and why did you first start making ‘art’ (toys, drawings, paintings, anything)?

I started drawing in elementary school. I took art all through middle school and high school but admittedly always took more English classes. I really focused on English in college and didn’t pick up drawing again till my 20’s. I think the break helped it really cracked down a lot of apprehensions I had about how to work with form and detail. Draw want you want to see not what others want to see.

I live the 24/7 art/toy life LOL! I was working at a local comic shop and realized that not only was my boss not up to par but I was literally in a dead end job. I had been drawing at home more since I had really picked it back up when working at a call center. So I quit my comic shop job wandered lost for a bit ended up at a GNC. I was selling protein to huge dudes having never stepped foot in a gym (Skating and kickball keep me healthy). There was a lot of downtime at GNC so I sketched a lot. Around the same time I got to talking to Brandt Peters and Kathie Olivas and they asked me to start working for them at their gallery. At that point I took the ball and ran with it and went all in.

Like I said art classes in grade school nothing in college. Pivotal moment would have to be the first “creep” design I ever did. I was working at Citi group on the phones and I would piss off the other employees by playing Carcass while I was at my desk in between calls on day I just started drawing this kid eating a pentagram and screaming for more metal… I knew exactly how he felt LOL.

Why the name “Toys Are Sanity”?

It’s silly but it means what it says. My life was super shitty around the time I came up with the name. The only thing that keeps me calm and from completely losing my shit is toys and always will be. I’ve been straight edge for 10 years and toys have become my outlet.

Pushead is the top of the totem pole. He is just a beast when it comes to line work and everything an illustrator should master. After Pus it would be Skinner, Ragnar, Michael Skattum, and Coop, all for distinct reasons to each of them. All of them aside Brandt and Kathie have done an amazing amount for me and I respect and adore them both as artists. You can never truly appreciate the hand that feeds you enough. They give everything for their work and fans and I can’t say anything but positives about both their work as artists and people.

(Picture below of Mikee + Pushead) 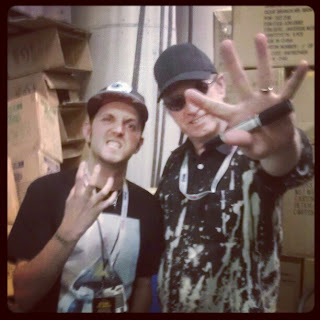 Flippers. Especially the kids that come on the message boards and act like they love this stuff the way most of us do. Then they turn around and flip all there shit and try to sneak back in again later. No respect for the flip.

The friends I’ve made! I said going into this I didn’t want to be known or even to get paid. I said that the only thing I desired was to make toys with my friends. I am very lucky to be doing just that.

Is the rise of ‘art’ toys an indication of the changing nature of ‘art’? OR just a bunch of nerds with too much $ and time?

I feel like it’s an extension of the idea of Pop art. Like the whole idea of Artist as a novelty became the idea of Artist as a brand. The toys should be a clear extension of the Artist work. In my head it all makes perfect sense! Like if you love a band you are gonna by their t-shirts if you love an artist of course you would want a toy of them. That said kids are spending top dollar on some crazy stuff these days.

This question is just too complicated for me. Every single variable gets brought into account. Do I love this toy because of the artist? is it the texture? Is it the modular design work? Is it the throw back style of it? I really couldn’t pick one. If my house ever burned down I would go down with them all.

(Picture below of some of Mikee’s personal collection, including some Sewer Creeps and Splurrt figures) 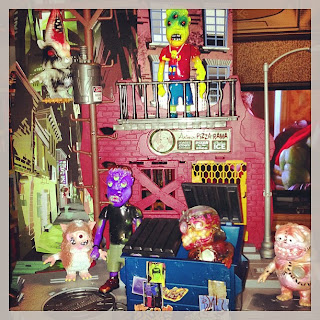 What are your thoughts of the toy forum scene as a way for fans and artists to communicate? Is it a real ‘community’ or just a virtual locker-room shit talk? I ask as we are both members of Skullbrain…

I love message boards! I love all of them I think it’s good that they keep us all away from each other lol!! Honestly though I have made amazing friends all over the globe because of message boards. Not to mention that I love SB. I don’t care what people say about it I am loyal. When people talk to me about it they always go “Skullbrain I heard that forum is full of dicks!” I usually smile and reply with a very satisfied yes. I like our little piece of the internet I wouldn’t trade any of those guys out… well except the flippers.

First I live in a place we call the Scum Pit. The roommates and I all play Kickball on Sundays we have had full house Nerf wars and I have even emptied the house out before to skate in it. We take the ideas of immaturity and ignorance and wear them as badges of pride. The house motto is basically that you can’t take life to seriously you’ll never make it out alive. I woke up like a week and a half ago and they were all dressed as wizards and playing Magic the Gathering. My girlfriend is amazing and patient with all of this and at the same time knows how to enjoy it. I’m a lucky degenerate.

I know that either your mom, or one of your friend’s mom’s made the mini-lab coat for your Re-Creeped Sewer Creep sofubi. Please describe the moment mom was asked to do this, and how she took to the task… And uhh… does she take commissions?

No moms we harmed or used in the making of those labcoats.

(Picture below of Mikee, the Re-Creeped Sewer Creep, and a friend – R2L) 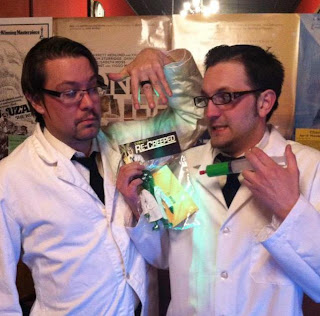 Your first sofubi so far, ‘Ian The Sewer Creep’ is great, and you have already done collaborations with Skinner, Leecifer, Hellopike, dski one; what was the inspiration behind the piece? And what was the process in making it – from idea, sculpt, and final manufacture?

(Picture below of Skinner’s take on the Sewer Creep – Blart) 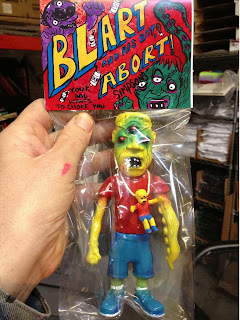 Ok so the inspiration is really simple. I love gross out horror movies, bad cartoons, 90’s playmate toys, skateboarding and hardcore. So I took my hands and shoved them together with that hot emss of shit in them and bam Ian was born (Named after the father of the edge). I designed him while on a shift at GNC and tweaked it for about three months then handed it off to Papa Grim toys. Steven sculpted and many emails followed. Then it was given to fort and made in sweet vinyl flesh. As far as the releases have gone I have been super lucky to make friends with some amazing guys while doing this. It’s been great working with all of them and I hope they would say the same for me. its pretty obvious I care about all this stuff more than anything else. I like to think that passion shows in the relationships I have made.

The ever talented god-of-slime Michael Skattum has done some art for a screen print you released. What was it like working with Michael? And how do you and he know each other?

Well we know each other from the board firstly. As for the process it was super easy Michael is a full on beast and his eyes are like the eyes I have always wanted. If I had my way I would just hand him rough ideas of toys and have him be my hands and eyes. My imagination gets the better of me that guy can do no wrong.

Any collaboration on the horizon?

I have a few things in the works right now. Lots of cool sculpts out there I want to see made just as much as I would like to do a new one of my own.

All I will say about that at the moment is Skattum and I talk pretty damn often.