Tyler Ham is a new player in the toy-art (art-toy) world whose background in film effects has trained him perfectly for a life of art in all it’s forms.

(Picture below of Tyler Ham posing with actor Richard Kiel) 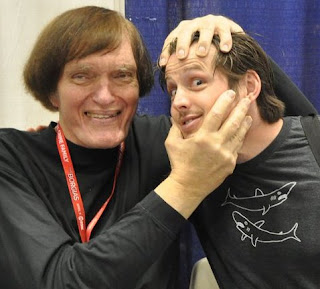 Tyler releases art (cartoons, sculptures and bootlegs) through his personal company ‘HAM FX‘, and is also a keen collaborator, having worked with ‘Killer Bootlegs‘ previously; and with an upcoming collaboration with Morgan ‘The Sucklord‘ Phillips about to drop soon, now is a perfect time to get to know the man and his art…

So get to know Tyler Ham, and ‘HAM FX’ in the interview below…

(Picture below of a young Tyler hanging with The Hoff) 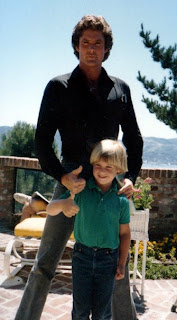 At age 10, I was all about cartoons and toys- Two things I never really grew out of as it would turn out. When I was 9 an episode of KNIGHT RIDER was filmed at my house, which planted the seeds of becoming a filmmaker.

I was kind of “Lost” at 15. Trying to figure out where I fit in. I was an awful student. I loved Art, but for the most part I was really walking the fine line between getting my shit together, or turning into a total fuck-up.

By 20 I was in film school, and I really felt like that was what I was meant to be doing. I had a love of special effects, and when I turned 22 (After film school) I went to an intensive learning 18 month Digital arts program.

I don’t think I have one but my wife seems to think my personal quote is “Nope.”

Depending on the day it could be Buckethead, or Sarah Brightman. If you diagnosed my iTunes it would probably make me look Schizophrenic.

Not really a sports guy but I love UFC!

The original Star Wars trilogy and the Indy Jones films are obvious. I love The Thing, Halloween, All the classic Universal Monsters films, Abbott and Costello Meet Frankenstein, Last of the Mohicans, Ed Wood, I could name hundreds…

I love horror (Salem’s Lot) and true crime books (Mindhunter), especially when dealing with criminal profiling. The only comics I read now are Walking Dead and The Goon.

I like to consider it art. I mean, not to say it’s all “good” art, but it’s art and I’m going to stick with that.

You have had an extensive commercial background in film visual effects, working with major companies such as Industrial Light and Magic. Why and how did you decide to immerse in the film FX world?

“The Making of Return of the Jedi” TV Special started it. I knew as a kid that I wanted to work at ILM – – It took a little longer than I thought it would back then, but I got there and was even on the Academy Award winning “Pirates of the Caribbean 2” team.

When and why did you first start making ‘art’ (toys, drawings, paintings, anything)?

(Picture below of a custom ‘Thriller’ figure by Tyler) 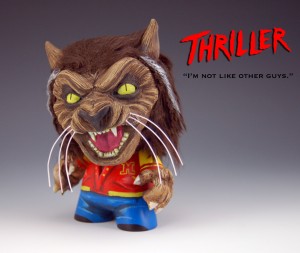 I started as soon as I could pick up a crayon. I was bad at sports and got terrible grades. The art room was the only place I really felt like I belonged.

Not any fine art training, but 18 months of digital art training to get me ready for the VFX world.

I came up with that when I was trying to redesign my career. I wanted to try a lot of different artistic avenues, and “FX” was a general “catch all” term. I try to go by Tyler Ham more though now.

“Never let things get easy.” When anything I do starts to become easy, I get bored with it. I love making toys and art, and I never want it to be “easy.”.

Favorite medium to make art outta – I notice you sculpt as well as bootleg?

There is a fun art in Bootlegging – Using existing pieces and making something “yours” out of them. I do enjoy sculpting and bootlegs lets me do both and people seem to enjoy the two equally! If I had to choose though, my favorite medium is clay sculpture, but really I’m most comfortable in the digital sculpting world.

I’m a big fan of Sucklord and Killer Bootlegs, and Buffmonster. Another “toy artist” I really like is Randy Regier. That guy is a genius. Johnny Craig is my favorite comic artist, and as far as fine artists go, I have too many to list (For example, my dog is named after Gustave Moreau)

No real constructive criticism of pieces that are being produced. I feel like it’s (This is a generalization) all ‘superfan’ or ‘hater.’ We need a toy-art critic.

Meeting people. I have met a lot of awesome people, and am now doing collabs and consider myself friends with a lot of people I never would have met if it wasn’t for the hustle.

Is the rise of ‘art’ toys an indication of the changing nature of ‘art’? OR just a bunch of nerds with too much $$ and time?

Both! Most of us are kids of the 80’s (The Toy Generation) It’s no wonder we make and buy art that is based on what inspired us as children. Getting Battle Cat at Christmas as a kid can “move” you as much as reading Mark Twain.

My favorite toy that I currently own is the “1936 Daisy Buck Rogers Liquid Helium Water Pistol.” It sort of encapsulates everything I think is cool about vintage ray guns. I even have its original box! 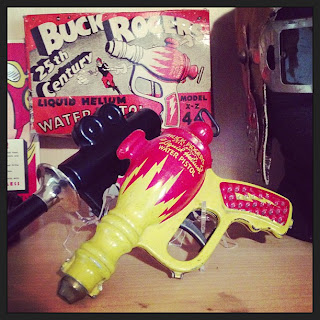 What are your thoughts on ‘The Sucklord’, and his role in the art-toy scene? (I ask as he is kinda the ‘ur’ toy-bootlegger)

Sucklord started a movement. The guy is smart, clever, and creative; an artist in every sense of the word. The guy can talk philosophy, psychology, and then Star Wars mythology all within a few moments time. As a person, what I like about him is that he challenges you. If you say something he doesn’t agree with or wants to know more about, he stops you and says something like “Well why do you think that.” I’ll admit that it caught me off guard at first, but it is now one of the things I admire most about him.

What are your thoughts on Peter + ‘Killer Bootlegs’ – I ask as he is a new-gun in the game doing great things like hosting shows, collaborating + generally being a big player in the scene; and I know you have collaborated with him yourself!

(Picture below of Gollum, a collaboration between Tyler + ‘Killer Bootlegs‘) 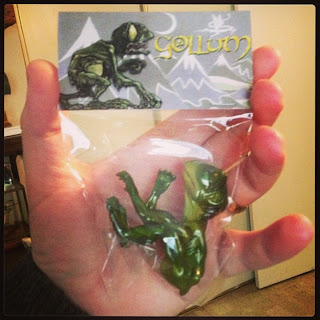 As an artist, you won’t find a more driven person. His dedication to the bootleg scene is inspiring. He honestly loves this art form and is a hell of an artist. I also really like that he is pushing the boundaries of adding articulation to his figures, and creating cardbacks that are artworks themselves. He is upping the game for everyone in the scene and I think his work can stand up against anything else out there. As a person, I’m proud to call him a friend. That’s about the nicest thing I can say about anyone.

What are your thoughts of the toy forum scene as a way for fans and artists to communicate? Is it a real ‘community’ or just a virtual locker-room shit talk? I ask as we are both members of Galactic Jerkbags the Sucklord fan site…

The members at jerkbags are mature, rational, and its one of the only forums online where you can have a flat out argument with a dude in one thread, and be joking with him about something unrelated in the other. It’s a great place.

My wife is very supportive and she understands that I love it, even when she doesn’t really know “why.” She is creative herself and is a very talented jewelry designer, so she appreciates the artistry of what I am doing, and she has a lot of respect for the creative process.

Are all the works by ‘HAM FX’ made by yourself? If you use collaborators; whom and in what capacity?

My first two pieces were collabs that I sculpted. Gollum was cast / painted by Killer, and my project with Sucklord is being cast and painted by him. The Amazon was all me though!

Describe the method of making a ‘HAM FX’ piece…?

a) your sculptural + prop based work, such as ‘The Creature from the Black Lagoon Claw’?

(Picture below of ‘…The Claw’ by Tyler) 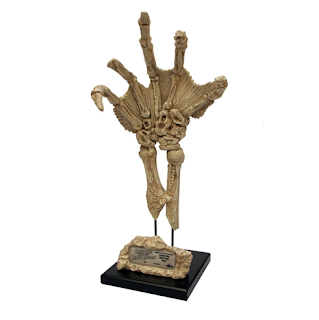 The piece required a LOT of R&D since the original prop is more or less lost. The piece itself was roughed out in a software package called MAYA and detailed in a sculpting program called MUDBOX. After that it was output to a 3D printer and that master was sent to the factory. It’s kind of crazy seeing it for sale online now. Almost surreal in a way.

b) your bootleg work, such as your recent ‘The Amazon’?

(Picture below of ‘The Amazon’ bootleg by Tyler) 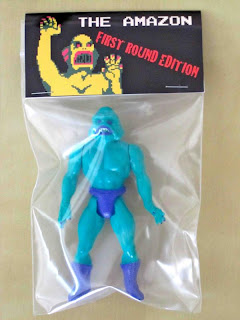 I wanted to use source toylines that weren’t being readily used, and go for a theme that wasn’t “common” but still meant something to me, and PRO WRESTLING on the NES was one of my favorite games as a kid.

c) your video work such as your short animation ‘…Or Treat’?

(Picture below of some storyboard art by Tyler for ‘…Or Treat’) 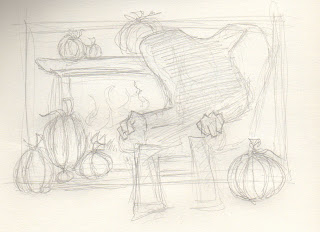 I did ‘…OR TREAT‘ when I was laid off from the VFX industry actually. I set a goal that I wanted to make a horror “movie” that was shown in festivals. While carving pumpkins that year, I got the idea, wrote it out, and hired an animator and composer to make it a reality for me. (I wrote the script, drew the storyboards and directed it) So far it has been shown in 11 festivals all over the world as well as on TV.

Your piece for the recent ‘Toys Are Us’ show – ‘The Thing’ – is great; what was the inspiration behind the piece? And what was the process in making it?

(Picture below of ‘The Thing’ art-sculpture by Tyler) 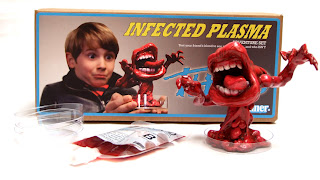 I love “ironic” pieces and making a toy for young children out of one of the most suspenseful “not at all for kids” horror movie scenes ever seemed like a fun challenge. I sculpted the monster, and used my boss’s son as the “model” on the box. The rest of the extras were found objects.

Your 1st ‘bootleg’ toy ‘The Amazon’ was recently released and sold out in under 12 hours! What was the inspiration behind that piece? And what figures were used in kit-bashing it?

(Picture below of ‘The Amazon’ bootleg pre moulding) 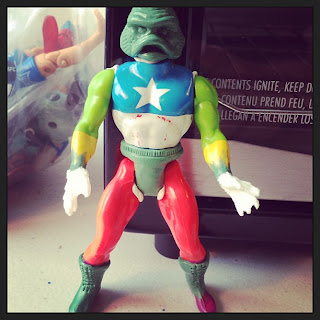 The inspiration was really my love for that old 8-Bit game (That I never beat.) The figure is mostly Secret Wars parts, Remco Creature hands, and a sculpted head. I also sculpted the boots and shorts.

Killer is releasing more Gollums, and Sucklord is releasing our collab soon. I have talked to both of them about doing more in the future so we will see. I would love to sculpt a “Cheap toy” for Buffmonster. Really, I love working with people so if anyone wants to do something, let me know.

Just keep an eye out for more collabs and releases!