Karl Kaufmann is a ConvictTown artist and designer with a background in tattoo, who turned his hand to full time art and design work about a decade ago. His style brings to mind trash-cultrue, rock n roll and the low-brow greats – Bold lines, great detail and a love of the outre…

(Picture below of one of Karl’s pieces) 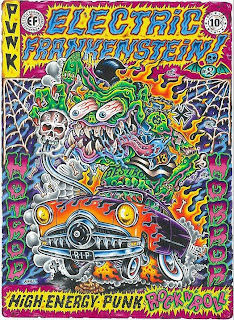 Early years of schooling – I remember always collecting stuff. They had cool stuff back then, hotrod cards and stickers with crazy monsters driving them; cool critters that you got out of cereal boxes; rubber monsters and all types of ugly bugglings. There were cool matchbox cars and hotrod Daddy Roth plastic model kits. Hey, there was lots of inspiration out there in the late 60s and early 70s. 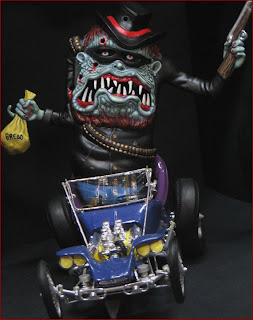 Went to Chester Hill High in the Western suburbs.

Yeah saw it as a place to go that kept kids off the streets. Didn’t like much of it but liked all the hands on stuff: art, woodwork, metalwork and graphic arts. They could have had more of those types of lessons.

I left school in year 10. I got on my pushbike and figured I’d go look for a job and find some kind of a trade. Around my area where I lived, there were plenty factories, it was an industrial area. Back then, there were a few print shops around and I landed an apprenticeship as a printing machinist just down the road from my place.

(Picture below of a young Karl) 20 was kind of a mixed up age. Plenty of drinking, going out and getting restless.

Do what you wanna do but try and do it right.

Musically, I like a wide range of stuff. Usually keep going back to the raw, old rockabilly, you know, like cowpunk, earthy obscure stuff, old blues and country in the same vein. Stuff like Charlie Feathers and Hasil Adkins.

I really dig 60s garage and garage punk, fast instrumental music, surf. Yeah, all sorts of stuff like 70s and 80s punk as well as the stuff I was hooked on in my teens.

I also listen to lots of psychobilly, again, too many good bands to mention: Cramps, Meteors, Demented Are Go and many more. The bands that triggered me off to listening to all this stuff, were the Cramps and early punk bands like the Sex Pistols, which I started getting into in the late 70s, early 80s.

I really don’t watch any shows on the twit box these days: there’s not much good on the telly and it’s flooded with stupid reality shows that are not reality to me.

When I was a kid growing up, they had some super shows, things called movies. They showed old movies in the morning, midday and at night. They also had ripper shows like The Munsters, Adams Family, Lost in Space, It’s About Time, Car 54 Where Are You and Twilight Zone, just to name a few. Watching that stuff, if it didn’t screw your mind then maybe you learn a thing or two.

(Tattoo below by Karl of the classic Universal studios Swamp Creature) 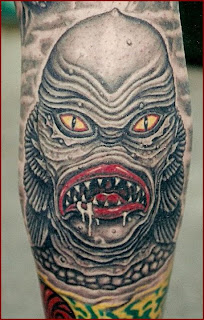 I’m not much of a sportsman, I hated group sports and didn’t see the sense in running after balls. I liked stuff like roller skating, ice skating, skateboarding, water skiing and bike riding.

All my favourite movies are usually old horror, sci-fi or quirky b-grade stuff. There’s too many to name. Usually bad stuff that’s good. I love the classic Universal monster stuff. I like getting dvds with all the classic trailers on them and I have them playing in the background when I have my music blaring. I also love all the old, bizarre cartoons from the 30s, 40s and 50s. They had cool characters back then.

(Picture below of King Kong by Karl) 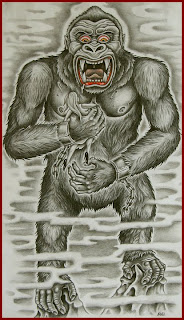 No favourite books really, I like snippets on history and interesting people. Ha, I like big glossy books with lots of pictures, I don’t read too much. I scan through and get the stuff I need.

I dig looking at comics, all that horror stuff from the 40s, 50s and 60s. Love the old Mickey Rat comics and Zippy the Pinhead. I like Robert Crumb’s stuff. Freak Brothers comic is okay too.

Do you consider what you are making to be “art”, “design”, re-hashed crap?

(Picture below of a Karl Kaufmann piece in progress) 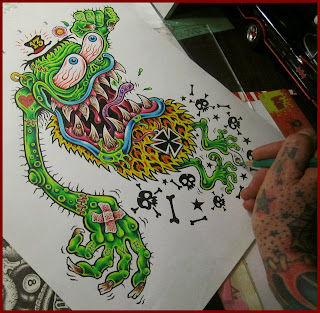 Yeah, I do consider my work to be art. And yep, rehashed crap. I think we all get ideas and inspiration from others and old stuff. But hey, you gotta add your own spin on things, get your own style happening so people can tell it’s coming from you. Express yourself, strive for your own feel – there’s too many blatant copycats out there that cut stuff flat.

I like all kinds of art. Usually stuff that grabs me and I get some kind of feeling from it or connection with it. Any art is good if you can get a reaction from it. Bad or good, positive or negative, who gives a fuck!

When and why did you first start making art (drawings, paintings, anything)?

Well, yeah I left school and started an apprenticeship as a printing machinist which was a trade and a craft with very little to do with art. It nevertheless gave me a good work ethic. I was in the printing trade for 16 years but I was always drawing whenever I had the chance.

(Pictures below of Karl’s art, from sketch, to drawing to final tattoo) 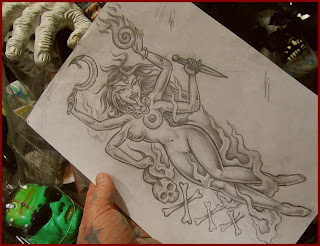 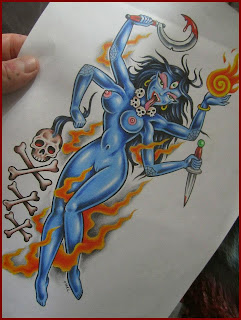 No, I didn’t have any major art training. I did do a correspondence course in commercial art while I was a printer which I got a few pointers out of. I’m kind of self-taught through trial and error, experimenting and looking at other people’s work, books and things.

(Picture below of an etching done by Karl) 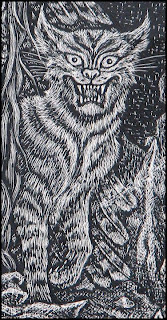 I like using water colour pencils because they are easy to cart around and very versatile. I do like to paint with watercolour and gouache as well and I do like to mix these two mediums together in the one illustration.

I’ve got so many favourite artists, too many to name. There are also lots of people I know and I’ve worked with during my years as a tattooist: Brad Lon and Trevor Bennett, just to name a few. You should check their stuff out. Brad does some crazy stuff, straight off the top of his head and Trevor’s a master of black and grey shading. Also, you should check out my girlfriend, Samira Helmy’s work, she’s now tattooing at LDF Tattoo Marrickville. She does great, detailed colour pencil work.

Nowadays, the art is incredible and there’s so many good artists out there, so much talent, so much to see in the tattoo and lowbrow scene.

I also get a lot of inspiration from artists of the middle ages and beyond, like Heironymous Bosch, Peter Breugel, Albrecht Durer, Hogarth and Grunwald, to name a few. I’m also very much inspired by all the guys in the early lowbrow art scene that kicked me off as a kid: Roth, Von Dutch, Basil Wolverton, Robert Crumb, Robert Williams and others.

What are your thoughts on Sindy Sinn and his role in the Convict town art scene as a new gun in the game?

(Picture below of the logo Karl did for Sindy’s old band, ‘L.U.S.T‘) 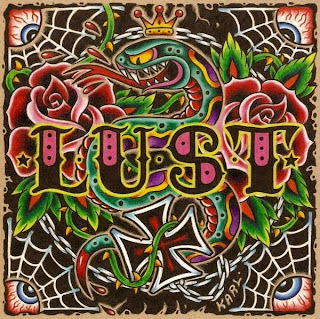 That Sindy Sinn guy, I met him a few years ago, young lad, he wanted me to tattoo a pirate ship on him. I found out later that he was into drawing and he’s out there and a very talented illustrator. The guy’s getting right into it, he’s got great ideas and plenty of energy. I’m inspired by his stuff.

Are all the works by Karl Kaufmann made by yourself? If you use collaborators, whom and in what capacity?

Yep I do all my own stuff and it’s all done by hand, in pencil or paint. I don’t use any computer graphics.

Describe the method of making a Karl Kaufmann piece?

I get a loose idea, shapes and images in my head. I then do a rough plan in lead pencil, basically going by the feel of the thing, working and reworking it. When it looks and feels right, I start on the final drawing. I trace and redraw the rough and rework it in pen, pencil or paint.

You have a range of t-shirts for sale on your website. Plans to develop this into a full range? Or just the occasional drop when you do a design you find appropriate?

(Picture below of one of Karl’s t-shirts) 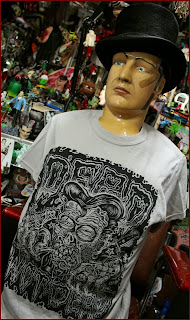 Hey yeah, I want to get a bigger range up there and will do that.

You have a background in tattoo. How has being a tattoo artist contributed to your life personally, and your life as an artist?

(Picture below of Karl hard at work) 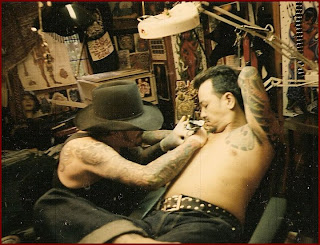 Tattooing really opened my eyes, gave me more contact with people. I think tattooing is more of a craft than an art. Tattooing has also pushed me harder to get the drawing side of it happening, which had me learning and drawing more stuff.